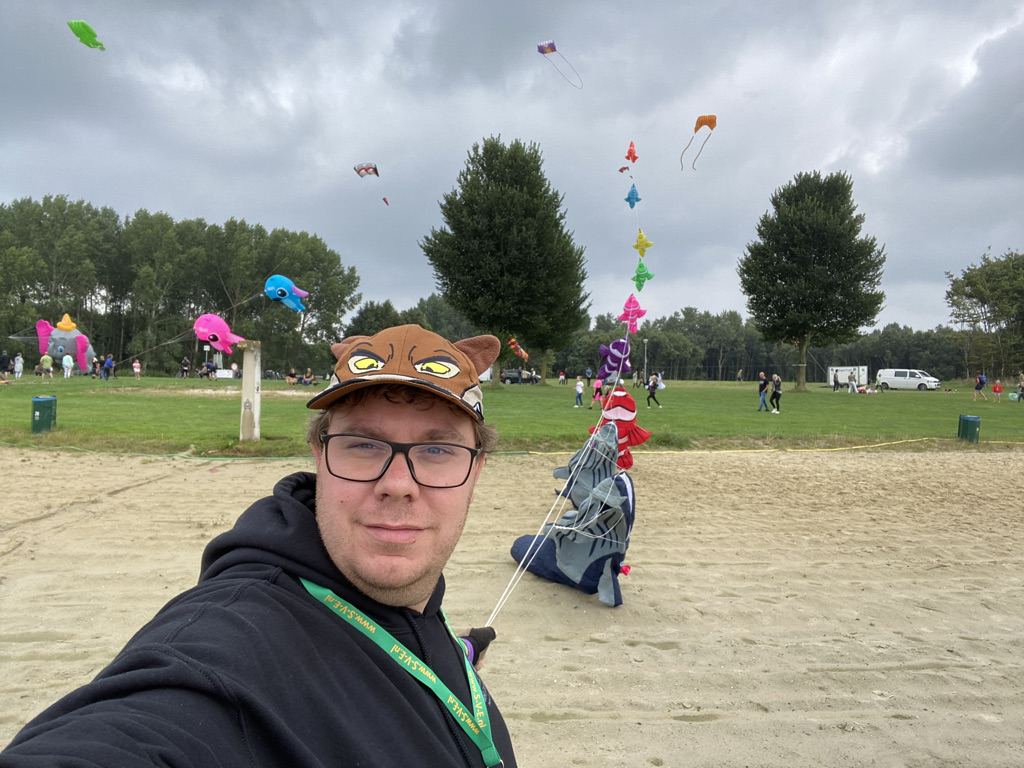 Since long a holiday in August

For the first time in a long time I had the chance to take a week off. it was a week full of fun, adventure and of course kite flying. All this in one of my favorite countries, the Netherlands. And psst… (in a whisper) with the friends of “vliegeren is voor iedereen”. let’s start this rollercoaster (hint, hint)

Due to the large amount of adventure, I have divided this report slightly differently than usual and this per day. Press the arrows to scroll through the days and continue reading. enjoy

On Monday evening I went to pick up my trailer from my acquaintances where the trailer is parked a village further.

After loading the last things, everything was ready to leave the next day. or so I thought…

at 7:30 in the morning I had an appointment at the car inspection, which is normally a formality,

turned out to be a little different,

The car was rejected based on the misaligned lights.

This means extra driving around and having it fixed before I could continue with my plans.

After a drive to the garage 2 villages further, the problem with the lamps was solved.

After solving the problem, back 2 villages further to the car inspection, this time everything was fine.

On my way to the Netherlands I stopped at work for a while, this to pass on a few things to my colleague so the week I have off, could go as smoothly as possible.

Around 12:45 I continued towards the Netherlands.

After almost 2 hours of driving, I finally arrived at the hotel in Drunen (NL)

After getting settled in the hotel, I got the question from my friends in Heusden if I had any plans,

I didn’t have that and so suddenly I was unexpectedly at the bowling alley… the result was Belgium – Netherlands, 1-0

After that it was bedtime because on Wednesday there was something on the schedule that had been on my bucket list for a long, long time.

The day started with a 200 meter walk in the woods. I had agreed with Rob and Marjolijn that they would pick me up at the hotel,

After a fifteen minute drive we arrived at the Efteling at 10 o’clock.

after starting at the 4D cinema Fabula and ending 12 hours later in the white water river Piraña where we covered a distance of about 15km throughout the day.

During the day we also decided to visit the Flying Dutchman.

Just before – and after an hour of queuing – it was our turn, the attraction broke down, in short, queued up for nothing and no Flying Dutchman.

Then we went to another attraction

After the long walk, it was dark and time to return home (or in this case, the hotel)

Of course I saw and did a lot more during the day. I can talk about it for hours but I won’t, I’ll let the pictures speak for themselves.

Thursday 19 August – On the way to Emmen

After trying to sleep in, which failed miserably, thanks to the work rhythm.

It was time to leave for Emmen. After a few hours of driving we arrived at de Grote Rietplas.

After registering, putting the tent and the caravan in place, it was already evening. After some shopping we visited a restaurant there for dinner and a drink.

After breakfast on Friday there was already a bit of wind

The official opening was only in the evening, but our service park was already there early in the morning.

The friends of vrienden is voor iedereen tested their newest addition

I also tested my newest addition. A kite train, powered by a red delta canard.

I still need to change a few things if I want to keep doing this.

Unfortunately there was just a little too little wind to pull the turbine into the air, luckily I had a pole at hand.

after several hours of flying kites, a shower of rain came over. After the rain, the wind was gone.

This was no problem, because then I could get out the light wind kite.

In the evening at the campsite it was time to test Sparky. With the blower and a set of batteries there was something to see between the trees.

Saturday morning started with a not so good omen, namely fog.

After breakfast we set up the service park again,

However, the wind stayed away and this for almost the rest of the day.

Today was not a kite day but a kite exhibition day. For example, I set up various displays, so that the visitors still had something to see on the field.

After dinner it was time again for the evening activities, normally there was a real night kite show on the program.

Once dark, the lights went back on

Sparky was finally able to go up in the air

There was also some wind on the ground.

At the neighbors, more large kites were put in the sky

This was also the case with other kite fliers

Around 3 pm it started to rain, so all the kites were cleaned up.

The tent was put away for the last time and can be retired.

Around 5 pm we were able to leave for home. around 8 pm we were home at Vliegeren is voor iedereen HQ.

Then after saying goodbye I left to the hotel.

Monday, August 23 – End of the holidays

after checking out at 11am, i left for home.

After that I dried a few kites, put the trailer away and brought the car to the garage for maintenance.

And then, then this week’s leave was over.

The car is now back in the garage, and is ready for the next kite activity. We look back fondly on the past week and hope to be able to visit again in the future.