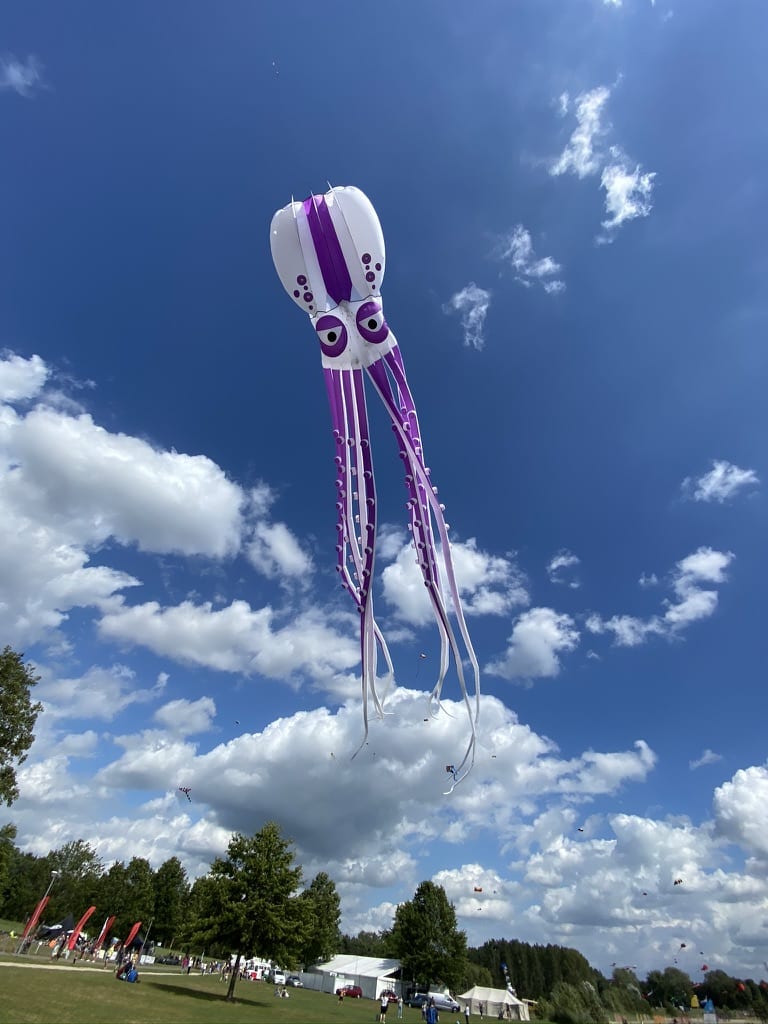 A few days ago I received the message from Marjolein from “Vliegeren is voor iedereen” and I quote “when do you come, there will be presents with Steve on it?”. Before I knew it, I had booked a hotel near Heusden NL.

After I closed the door of my desk at work on Friday around 4 pm, I left for Drunen (NL) where my hotel is located. After the check-in and McDonnalds in Waalwijk, I went to Heusden.

Once at the kite spot, it turned out that the wind had disappeared.

Then we put everything away and left for the hotel, resting for the next day.

9 am, Time for breakfast at VIVI-HQ. After breakfast, it was time to leave for Emmen.

2.5 hours later, we were at the kite field in Emmen. The wind was good already, because there were already a few kites in the air.

After we first walked around the field ourselves, we picked up our kites.

There was a bit too much wind for my kites. therefore these stayed nicely in the kite bag. Rob’s pilot did it without any problems.

I also brought Team Sushi to Emmen, some of them could go under the octo.

Of course there was much more to see, here is a small impression

After the return trip from Emmen to Heusden it was time to eat something. We drove to a neighboring village where they have a spare ribs restaurant. we had a lovely meal there. During dinner it was clear that the wind was not abating. Ideal for a new attempt at night flying.

I tried to make a kite train with single conyne kites and a double conyne.

I’ll have to dig into it some more, because it wasn’t a great success.

Meanwhile, Rob was busy drying Viviv the dog. it had been hit by rain in Emmen.

After the dog it was time for the octo, finally we managed to fly it in the dark

There is of course much more octopus than just that one photo, below you can see many more colors.

And then, the catastrophe, just as we were cleaning up, the pilot’s rope snapped. The rope snapped at a height of 10 meters, so there was nothing we could do.

a major rescue operation was set up, various calls were launched on social media, we drove and walked all over Heusden but in vain.

we ended the day with a bad feeling.

9:30 am, just left the hotel on my way home when I had a hunch. What if we went looking with my KAP gear, after having quickly agreed with Rob we drove back to the kite spot in Heusden.

Cody, Camera, quickly get everything out of the car, but there turned out to be too much wind, then we went to have a look at the kite field and guess what?

The kite hung in the tree just 25 meters from the kite location.

We had walked by at least 5 times the day before and didn’t notice anything.

After everything was located and we had reached a ladder, it was the turn of the “squirrel” on duty to spring into action.

Angel climbed the tree and without much trouble the kite came down.

After 10 minutes the kite was on the ground, after an initial inspection nothing was found to be defective.

And so we could end the weekend with a good feeling,

Then the drive back home started and by 4 pm I was back safely in West Flanders / Belgium.

Be sure to check out the Facebook page of Vliegeren is voor iedereen, for more videos and photos