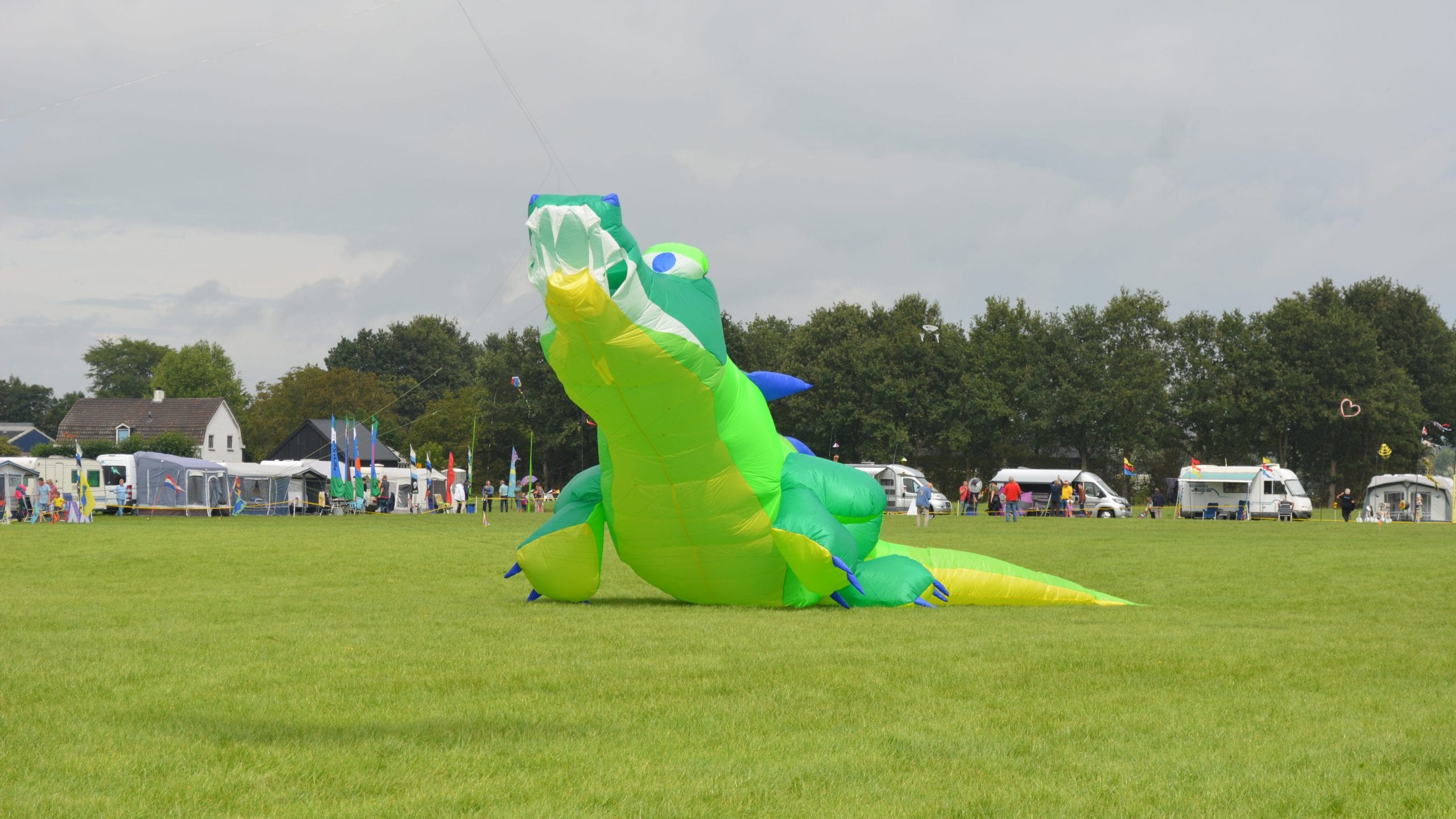 For the third time I was at the kite festival of Rijsbergen, together with many kite friends. Also this time it was a collaboration between me and the team members of Windforce kite team!

Here I took advantage of changing the tunnel tails, one red by yellow and one yellow by red.

I was the first to arrive at the kite festival together with Bernd and Melanie. After setting up the tent and passing by the Plus (supermarket …) it was time to fly a kite. I pushed 2 of my 14 canard deltas in the air, here I took advantage of changing the tunnel tails, one red by yellow and one yellow by red.

In the meantime Annette, Arjan and co had arrived and after setting up the tent and flying together, it was time for the evening meal. Here I made a “Bami-Shoarma-Potato-Vegetable-Wok for five of us.

At 10 o’clock we started the day with a not so stable wind and a covered sky. I had a demo on the demo field and it literally fell into the water

Rain does not stop us, because after rain comes sunshine. Or rather, no rain and clouds …. but this did not last the entire day; because later in the day there was rain, so it was kite flying between the showers. nevertheless we have tried to make it a nice day.

Between the rain showers, I tried to dry some Canards, but things gone wrong.

Suddenly I heard a loud bang, a lifter of the neighbors who did not fly as stable had come down and had taken one of my canards with it. Result: a tear and a broken stick. All in all, the damage was not too bad, nothing that cannot be repaired.

We have also done a bit of KAP, and it was not just me alone. There were several people who were taking aerial photos, each with their own system. Above is Bert with his system and below are my photos taken with the Gopro hero 6 black Auto KAP.

In between showers there was also the candy and teddybear dropping. This is always a fun venture for the little ones. Because tell yourself, who doesn’t like sweets. In the photos below you can see the work of Viktor, the kite a Heksebeest, accompanying messenger and of course sweets, teds and children

There were also many other kites in the air, because I cannot describe them all myself, I will let the photos speak:

After kite flying, it was time to have something to eat and socialize with the kite friends. Then it was time for night flying.

Saturday night it was time again to fly at night, I don’t have that many pictures of this, since I participated in the evening activities myself.

In collaboration with “Windforce kite team”

After the disappointing night kiting sessions of the past kite festivals, I succeeded this time , together with “Windforce kite team”. Thank you Heksebeest!

Day two, my demo could not take place as there was almost no wind in the morning.

That is why I have taken a walk around the field. This year too, there was an exhibition tent, with only historical kites

In the late afternoon, after the rain and the kite flying, the tent was dry so it was time to tear it down and pack it in, because work i had to work again on Monday. But before I left home, we all eat dinner together. I then left home and my friends from “Windforce” stayed until Monday morning.

We shouldn’t miss each other for a long time, because next Friday we will see each other again for the Ameland kite festival.