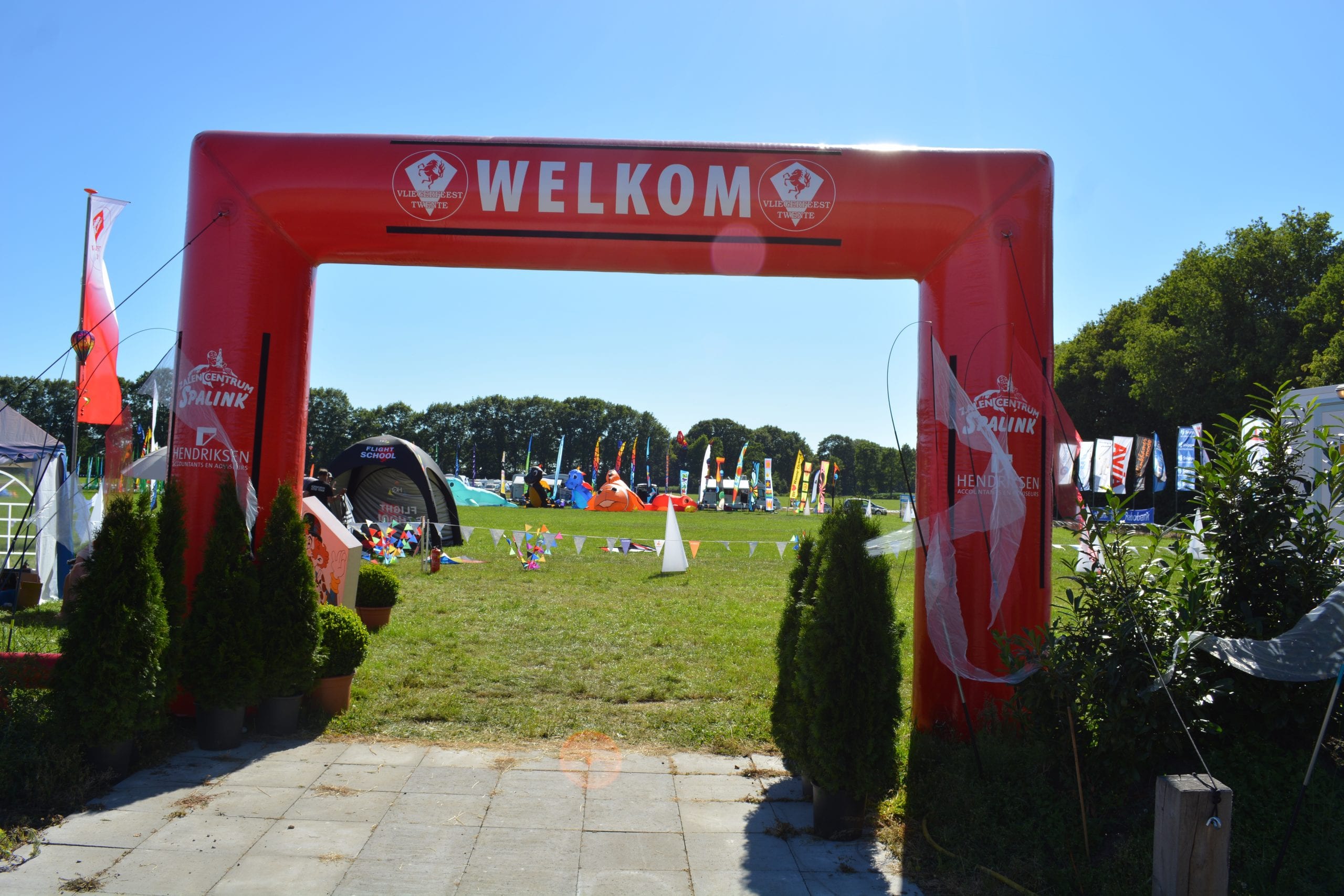 For the very first time I participated in the KF Twente. This was normally not on the schedule, but because we were told earlier this year that the KF Westende would not take place, a place became available in the agenda and here i am …

First I met up with my kitefriends in the region of Ede: Arjan, Anette and Tim from the Windforce kite team.

I left for Twente early in the morning, but I did not drive directly, first I met up with my kitefriends in the region of Ede: Arjan, Anette and Tim from the Windforce kite team. They live on my way to Twente and I thought it was a good idea to continue driving towards Geesteren together.

After three hours of driving I arrived in Ede, and it was a happy reunion after the Renesse kite festival. Before noon we had some time left and we decided to drive to the store, De Albert Heijn was around the corner and I needed some food. We also needed oil for the aggregate because there was no electricity. We don’t mind that at all, unless of course it is 35 ° C and you still want to keep things cold.

After the visit to Albert it was noon and time to eat a little something, connect everything, refuel and leave for Geesteren, after a good hour and a half we were on site and the construction could start. As usual, setting up the tent went reasonably smoothly and setting up the caravan was a piece of cake with united forces. After that it was time to fly some kites and to do some KAP, this was also the only KAP moment of the weekend.

We start to make it a habit that the first flying day usually does not turn out so well. If the wind speeds are not up to 60/h then it is a much too hot day and hardly any wind. The temperatures easily reached 35 ° on Saturday

If the wind speeds are not up to 60/h then it is a much too hot day and hardly any wind.

The temperatures easily reached 35 ° on Saturday

I still give a 10 for mood and cosiness! We did try to fly a few kites, but this really went wrong with Arjan. His Skybird crashed into the tree.

On the photo on the left you can see a Skybird, (Source: Google)

Various rescue attempts were made, for example, someone tried to climb the tree, but this was not the most strategic. We also tried to lift him from the tree with the Dopero, but this too failed. The Skybird was forced to spend the night in the tree waiting for more wind.

In between the rescue attempts and drinking liters of water, various attempts were made to fly with light kites such as my Dopero or this flowform. Deltas and heksebeesten were also present

In addition to kite flying, there were various peripheral activities, such as an exhibition in the theme of nature

There was also a lot to see around the field, Van Roses, Mantas, blown-up creations to kites, charging points for brooms, … in short, far too much and possibly I have not seen everything and I cannot show everything either, but a I try to give you a small impression and you can find it here:

Anyone who had managed to get a delta high in the air an hour before night flying was lucky, because there was some wind in the higher air layer, but there was hardly anything on the ground.

There was some wind in the higher air layer

but there was hardly anything on the ground

Next to the field there is a lot to see and experience, after setting up my koinobori and a walk around the field, it was also time to break down and enjoy the cooler air.

On Sunday the weather was slightly better, it was less warm, the wind was better. In short, we were able to fly kites!

With the flowform in the air, we were able to push things into the air like the Windforce Trilobite, a 25-meter monster.

In addition to our kite(s), there were also many other kites in the air, a summary can be found here

Let us also return to the crashed Skybird. Through the course of the day, waiting for wind that came from the right direction, the Skybird dropped a bit. We could still not lift it from the tree because the wind was heading in the wrong direction.

We were able to recover the kite, a few fellow Kite flyers had a long pole with them, we tied this together with one of our masts and so we were able to hang a rope on the kite so that we could pull it out. The damage was not too bad, only 1 stick that broke.

We could still not lift it from the tree

We were able to recover the kite

After saving the kite, it was time to clean up and head home. After a ride of 4 hours and a break in Ede and Antwerp I was home at 2 in the morning. after which I could enjoy a very short but well-deserved night’s rest.